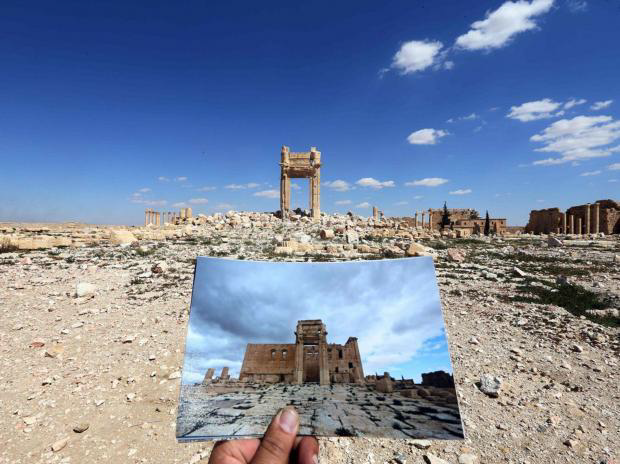 The Temple of Bel at Palmyra before and after IS. Photographs by Joseph Eid, who visited the site in 2014 and 2016 (JOSEPH EID/AFP/Getty Images; see The Independent, April 2, 2016)

In recent years the press gave much publicity to the destruction of Palmyra by Islamic State. This shows that the destruction of heritage in wartime is not ‘collateral damage’, but is part of the war itself. The reasons for destruction are usually symbolic and political and one of the aims is to undermine the morale of the enemy population as well as, in this case, to raise a middle finger to Europe and the US.

It is good to realise that this type of behaviour is not something new, as we can read in a recent book by James Noyes, The politics of iconoclasm; religion, violence and the culture of image-breaking in Christianity and Islam (London 2013). The history of ‘iconoclasm’ goes way back and includes, for example, the Iconoclast Fury of the 1560s in Europe (most outspoken in the Low Countries in 1566) and the destruction of religious symbols during the French Revolution. During the First World War, the German army deliberately destroyed the most important medieval library of the Low Countries, at Louvain. The Second World War saw widespread destruction of old city centres on both sides. After English bombers destroyed the medieval town of Lübeck – chosen as a target because of the many wooden houses – the German Luftwaffe stroke back with the so-called Baedeker-raids. Anthony Grayling, in his book Among the dead cities (Bloomsbury 2006: 51) quotes a certain Gustav Braun von Stumm of the German Foreign Office (24 April 1942): “We shall go out and bomb every building in Britain marked with three stars in the Baedeker Guide”. In the remaining part of the war, the majority of old city centres towns in Germany was bombed. On both sides, the aim of demoralising the victims was not reached, as most populations became more determined to fight until the bitter end. But the loss of heritage is still being felt by present generations.

Again, cultural heritage was destroyed during the wars in former Yugoslavia during the 1990s. For me, the scale of destruction of heritage first became clear in a book by the English journalist Robert Bevan, The destruction of memory; architecture at war (London 2006). He showed how the destruction of mosques and churches was part of processes of ‘ethnic cleansing’. The Yugoslav civil wars were part of a programme of building nation-states based on ethnic and religious uniformity, a programme that was developed during the nineteenth century and has destroyed the rich multi-ethnic and multi-religious societies in Central and Eastern-Europe in a succession of wars during the twentieth century. The destruction of religious and symbolic buildings would make the eviction of minorities irreversible. As Adolf Hitler, a well-known expert on these matters, once said: “Who remembers the Armenians?” (in fact, many people do).[1]

Perhaps the most important observation by Noyes is, that iconoclasm is not an inherent part of any religion or political movement, but is typical for specific periods and circumstances. Nowadays, in a world in which heritage is more valued than ever, is an important economical resource and is often connected to national identity, the message given by the destruction of heritage may be stronger than ever.

In the meantime, the destruction of heritage is no longer seen as a part of war damage, but as a crime in itself. In September 2016 the International Criminal Court sentenced an Islamic militant who helped destroy historic shrines in Timbuktu (Mali) to nine years in prison. It was the first time that the court focused solely on cultural destruction as a war crime (The Guardian, September 27, 2016). 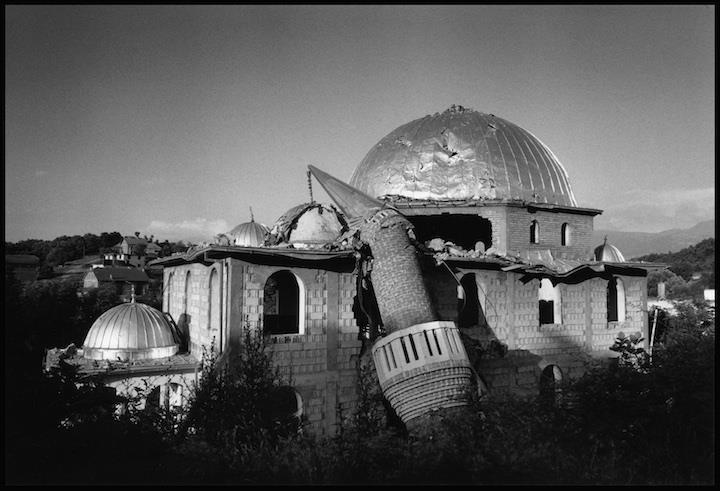 A mosque destroyed by Serb military or paramilitary forces on the road between Prizren and Djakove, Kosovo. Photo by Gary Knight (http://www.garyknight.org/evidencepersecution/ [19-3-2017]).