The Netherlands are about to change faster than ever before. Can our spatial heritage be of any help? All we need are a million new houses, a future-proof form of enery provision and a pair of dry feet.

These are the challenges that inspired the Dutch Cultural Heritage Agency (Rijksdienst voor Cultureel Erfgoed) to invite all of us to Rotterdam for a conference on heritage and space. Main question: how can ‘heritage’ contribute to spatial solutions for a sustainable future?

Only on this Monday in December, the conference’s audience will be allowed to Twitter ‘veranderd/t’ – ‘change/d’ – using the unusual (and generally incorrect) ‘d/t’ combination, moderator of the day Andrea van Pol jokingly explains. The title of the congress ‘Nederland veranderd/t’ refers to both past and future landscape changes. Indeed, both of them can inspire today’s most important spatial challenges, the vast crowd in the former Van Nelle factory is encouraged. Some flashy movie snippets and urgent speeches do the work.

Clearly, the event is a feast for anyone interested in questions of heritage and space. From all over the country, professionals of various backgrounds have traveled to Rotterdam to talk, listen, debate, ‘inspire and be inspired’, but most importantly: to meet each other. The event’s influx made the OV–fiets rental at Rotterdam Centraal work overtime, causing a late start on the impressive premises of the former provisions factory – today a World Heritage site more than suitable for hosting an event like this. Never before did the operator of the place find an easier crowd in front of him to narrate the site’s history and redevelopment to.

Equally impressive is the conference’s line-up. With over fourty lectures, workshops and excursions to choose from, chances for meeting some old and new heritage friends are high. Wonderful, but a bit disturbing at the same time. Obviously, everybody in this factory loves heritage. In this cathedral, ‘preaching to the converted’ is an easy conclusion to make.

But let’s stick to wonderful. On a morning excursion to the Rotterdam Central Station area, ‘Nederland veranderd/t’ lives up to the promise of an exciting event where policy makers, heritage experts and designers cross their different paths. In a matter of minutes, the bus ride from factory to Groothandelsgebouw (starting point of the excursion) changes into a backdrop for a whole bunch of interesting chats between interested people. The obvious conversation piece, right behind the touring car’s steamy windows: the glorious urban transformation of Rotterdam. A spatial revolution, a great example all of us should follow.

But what role can ‘heritage’ play in a city like Rotterdam? How can heritage inspire solutions for climate adaptation and renewable energy? Here, the urban planners designated to ‘adapt’ the Central Station area seem to struggle a bit. Their point of view: ‘In a city like Rotterdam, references to heritage can be symbolic at most.’

But how about using heritage, instead of referring to it? And what if we broaden the notion of what is heritage to the architectural values of modernism? Then, all of a sudden, the Weena avenue seems full of heritage, even without digging up medieval roads (which hardly have as much meaning for Rotterdammers as the city’s post-war spatial restructuring has). 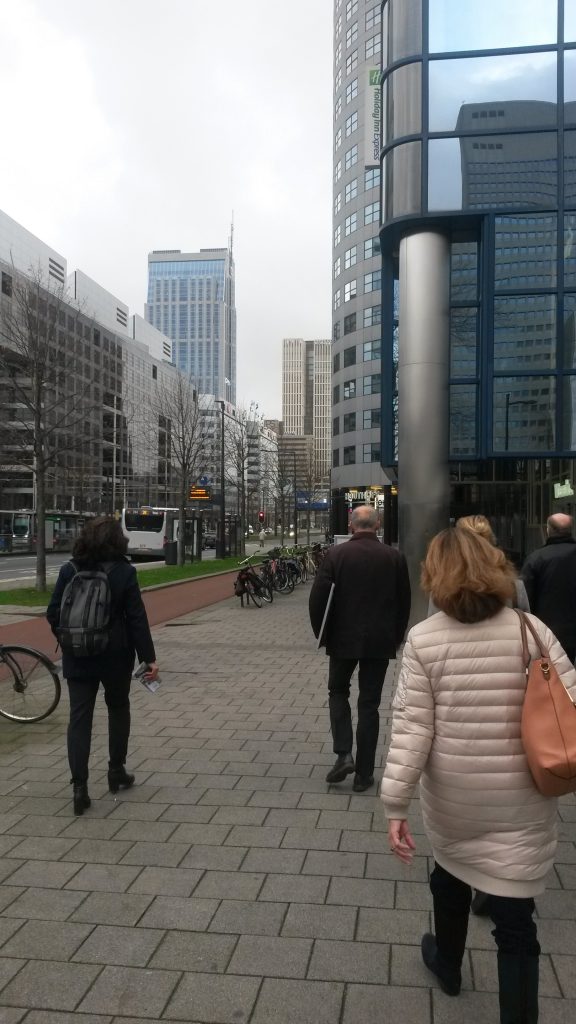 The short tour interestingly shows how targeted funding can make designers look for creative ways to let heritage inspire development, while at the same time, some traditional notions of ‘what is heritage’ do prevail.